Elementary particles, which make up everything in our world, have the amazing features that we cannot see in our daily life. One of the features is “color charges” which are compared to the three primary colors of red, green and blue. Playing the card game, you can understand the color charges intuitively and enjoy the world of elementary particle physics. The elementary particle “quark” is explained by the Quantum Chromodynamics which is abbreviated as QCD. The card game “Quark Card Dealer” is named after the abbreviation.

The theory of quarks; Quantum Chromodynamics

Quantum Chromodynamics is a theory of the “strong interaction”. which is a fundamental force between quarks. A constituent of an atomic nucleus like a proton or neutron is called “baryon”, and a baryon is a composite particle made of three quarks.

A quark has a property called “color charge” which is similar to electric charge. There are two types of electric charge, positive (+) and negative (-), and if a positive and a negative charge are combined they become neutral (0). On the other hand, a color charge has three possible values called `red’, `green’ and `blue’. In analogy to the three primary colors of light, combining these three charges, they become neutral (white).

Using the color model, “mesons” can be represented by the relation of `complementary colors’. Mesons are also one of constituent of an atomic nucleus and they are constructed from a quark and an antiquark which is an antiparticle of a quark. The color charges of antiquarks are called `cyan’, `magenta’ and `yellow’, and mesons are made up of a pair of complementary colors. This means that the color charge of mesons is white (neutral).For example, a red colored quark and a cyan colored antiquark combine as a meson. The particles that consist of quarks (and antiquarks) called “hadrons”. Baryons and mesons are different types of hadrons.

There are the other particles called “gluons” which has also color charges. Gluons are elementary particles that transmit strong force between quarks. Since all observed baryons, mesons and gluons have only “white color”, it is considered that color charged particles cannot be isolated and cannot be directly observed.

By the way, leptons (electrons and neutrinos) and photons do not have any color charges.

The mysteries of colors; Three primary colors and complementary colors 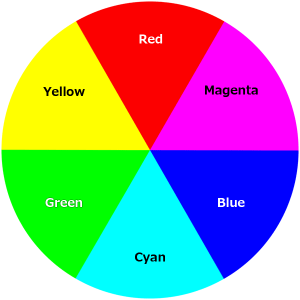 To be a QCD Master!; How to play

Comics version of “How to play QCD” are available.Click to enlarge. 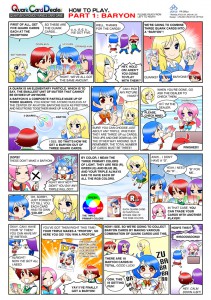 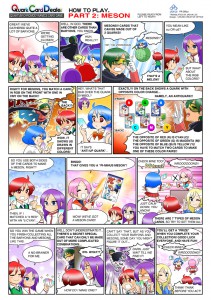 There are three categories of “Quark Card Dealer” cards, which are quark, baryon and meson cards. A hand consists of five quark cards and you make baryons or mesons by your hand. If you can construct hands of three cards according to predetermined rules, you can get a baryon card. Similarly, you can get a meson card when you have specific two quark cards in your hand. The cards that you got in the game can be taken home.

If you collect all the QCD cards completely, you will get the QCD sheet!

I. Take a starter deck

II. Get the baryon cards! ; 10 DIFFERENT cards to collect

III. Get the meson cards! ; 7 DIFFERENT cards to collect

The complementary colors of the three primary colors (cyan, magenta and yellow) are indicated in the back of the quark cards. Players trade their cards and collect a pair of complementary colored-cards: red and cyan, blue and magenta, green and yellow. When a player succeeds to collect the two cards, the player declares to the dealer and obtains a meson card which is made up from the two quark cards.

IV. When you collect all cards…: QCD sheet (A4 size)

There are ten kinds of baryon cards and seven kinds of meson cards. If you collect all of these cards, you will get “QCD sheet” for the prize. The QCD sheet contains all the data for elementary particles that appear in the QCD!

V. Can you get the special cards?

There are some undiscovered particles predicted by quantum chromodynamics. Those are constructed from more than four quarks. Let’s try to find those particles in the card game!